We're going to create a new GUI application that does some basic book analysis. The application will take a book, and count the number of unique words in the book. The GUI will display a heat map of the top 50 words. We're going to process some big books, which means it could take some time. We're going use multithreading to make sure that the application is not blocked. Additionally, we're going to update the UI every so often to provide updates to the user.
We're going to be applying the a form of divide and conquer through this implementation. When a book starts the analysis, a number of threads will be created. Each thread will process a line, and then merge the work back into the book object. It will then pick up the next line available to process. The idea is that the more threads the book uses, the faster it will accomplish the task.

For this final project we're going to be using a using more GUI stuff, threads, as well as some other patterns.
The application will have the following components:
​

​The word count will be the most basic component. It takes a sentence, and removes all punctuations, and separates each word to generate a unique count.
We're also going to keep what the highest and lowest count for the word is. That will allow us to generate good stats. We're also going to implement the ​Clonable​ interface to make sure data is safe when it moves from thread to thread or into the interface.


We're going to need some getters for other instances as well.

The ​Book​ class will be the coordinator for a word count. It will implement the ​Runnable interface which will allow us to work with multithreading. The book class will take a full book as a string. Split the break lines into a string array and using using a number of threads, process the book. Each thread will then merge their work into a single instance of the word count.
We will use the ​synchronized​ property to make sure that reads from the book do not overlap each other, and to make sure when data is modified that there are no collisions.

We're going to need some getters and setters.

We're going to create GUI Interface to run the book analysis. The GUI should have the following:

The book model can hold multiple instances of the book. The book model provides the layer of the interaction between the book and the controller. The model also keeps the data between books consistent.

The book controller will also need to be multithreaded. The controller should be able to spin a book analysis and continue running/working as well as updating the data in the interface.

We'll need to keep in mind that the needs to start the analysis, and run the loop with the update checking on the progress. Each of those will also be on their own thread. Because each book needs it's own thread, we will make things easier by using an inner class that implements the ​Runnable​ interface.

The buttons should also be blocked from any action while the analysis is running to prevent strange things from happening.

We're going to run the analysis on two books at the same time so we can compare speeds.

The view will display a few items: 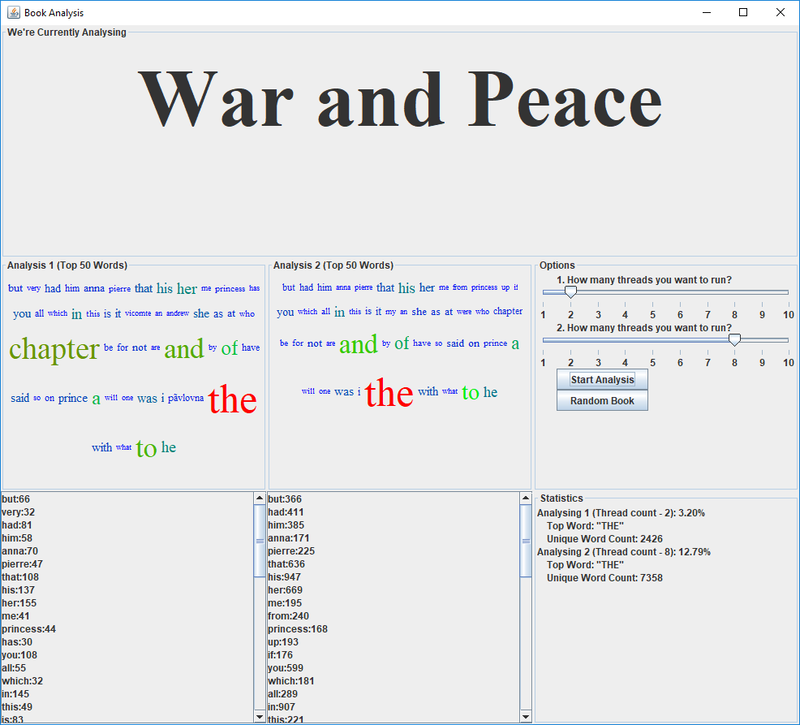 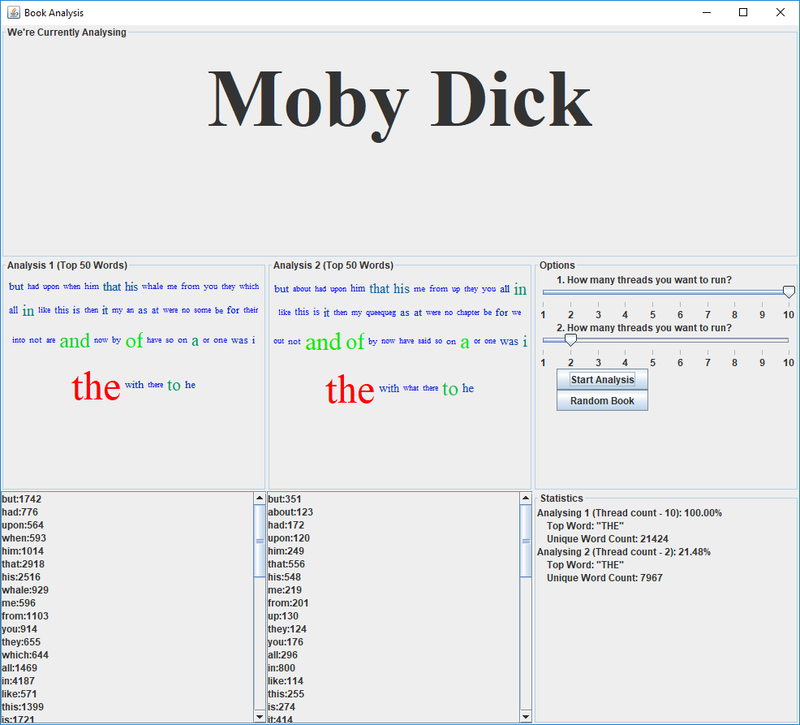